"It's Leia Mason's birthday party this weekend" said my mother holding up the invite. "Who?" I asked looking confused because I didn't recognise the name. "Leia Mason, she lives down at number ten, with her husband Billy!" replied Mother "They're the… Read more

On Friday night, my mother, dressed in a tight little blue dress and matching heels, my father, dressed in a shirt and trousers, and me dressed the same, were strolling down the road to the Dawson's house. It was Mrs Dawson's birthday, and my mother… Read more

We live next door to the Chesters, and have done since I was young, and Mr and Mrs Chester are an older mature couple who are almost retired, Mr Chester works at the local car factory, and Mrs Chester is a teacher at my school. Now when it comes to b… Read more

"Come on! This going to be fun!" grinned my mother as we walked down the road, with me dressed in a Hawaiian shirt and jeans, and her in a grass skirt and a coconut bra that barely covered her big white hanging breasts. "Do we have to dress like this… Read more 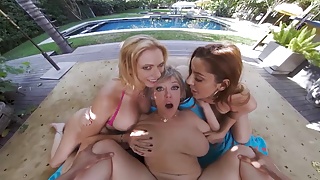 birthday party with the hotwife in the jacuzzi
6 36.1K

At Home with the Neighbours 6
53 20.1K
Show all
More Girls Chat with xHamsterLive girls now!
LIVE
{favorite}
{name}{icon}
Comments 2 Spam comments 0
Please log in or register to post comments
Spam comments are visible to you only, you can delete them or mark as not spam Delete all
S

shanklin
Another hot chapter. Thanks!
1 year ago
Reply
A